As I begin my blog postings for Mumbai, it is actually Saturday morning and we have completed our two day stay in the city. We are now sailing for an additional two and one-half days toward Dubai, UAE. I will do the Mumbai post in two parts, Day 73 & Day 74. Also please note that I did not do a post for the sea days, Days 70 & 72.

The seven islands that came to constitute Mumbai were home to communities of fishing colonies. For centuries, the islands were under the control of successive indigenous empires before being ceded to the Portuguese and subsequently to the British East India Company when in 1661 King Charles II married the Portuguese Catherine of Braganza, and as part of her dowry Charles received the ports of Tangier and seven islands of Bombay. During the mid-18th century, Bombay was reshaped by the Hornby Vellard project, which undertook reclamation of the area between the seven islands from the sea. Along with construction of major roads and railways, the reclamation project, completed in 1845, transformed Bombay into a major seaport on the Arabian Sea. Bombay in the 19th century was characterized by economic and educational development. During the early 20th century it became a strong base for the Indian independence movement. Upon India’s independence in 1947 the city was incorporated into Bombay State. In 1960, following the Samyukta Maharashtra movement, a new state of Maharashtra was created with Bombay as the capital. The city was renamed Mumbai in 1996.

Mumbai is the financial, commercial and entertainment capital of India. The city also houses India’s Hindi (Bollywood) and Marathi film and television industry. Mumbai’s business opportunities, as well as its potential to offer a higher standard of living, attract migrants from all over India, making the city a melting pot of many communities and cultures.

Sunrise as we were sailing into Mumbai.

The very first thing I noticed from our veranda as we approached the city was the smog. As we got closer the odor became obvious and my throat felt assaulted by the dust and poor air. 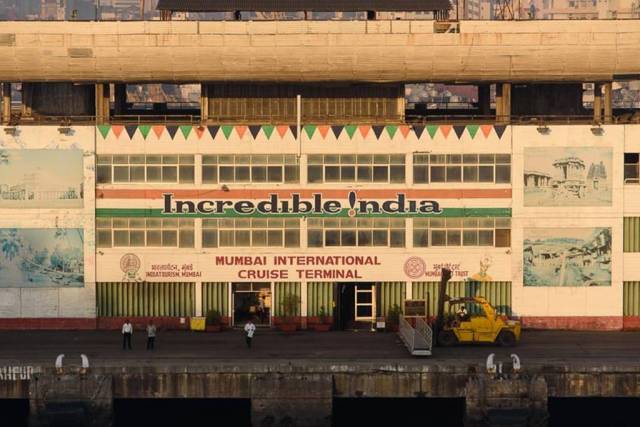 The Mumbai International Cruise Terminal is a pretty dirty and shabby affair with absolutely no amenities except a duty-free liquor store.

We had an excursion planned with Holland America, which we booked after boarding the ship. Before leaving home we had been reluctant to make an independent booking for this port so we waited to get details on the ship’s offerings. We decided to do an excursion to Elephanta Island located about seven miles off the coast of India. The Portuguese gave the island its name after the large statue of an elephant they found near the spot where they docked their ships. This five hour tour would afford us a short ride to the famed Gateway of India and access to the Gateway which is now closed to normal traffic due to security. We were then to board a small wooden ferry which would take us on a 45 minute cruise to the island where we then boarded a narrow gage train from the pier to the island.

The debarking procedure in Mumbai was the same as for Cochin. We had to individually retrieve our passport and appear before an immigration official who seemed to be being paid by the hour the way he minutely examined our documents. Keep in mind that we already had an Indian Visa and had already passed through this same routine once before. We were finally able to exit the ship, cross the dock to the terminal and then had to go through the procedure again before leaving the terminal. We boarded our assigned tour bus, rode the quarter of a mile to the gate where another official boarded the bus and AGAIN carefully examined our documents before allowing us to pass. On our return we went through the same process in reverse less the initial one on the ship. I thought the U.S. was difficult, but this was ridiculous.

The first thing our guide told us was that he did not work for the tour company, but was an employee of the Ministry of Tourism. To me this assured two things: we would only hear the “official” government line regarding any questions we asked that were sensitive and that he would not be receiving a gratuity from me. After all, isn’t it unethical at least and possibly illegal for a civil servant to accept money for their services…

The magnificent Gateway to India, built in 1911 to commemorate the visit of King George V and Queen Mary. It was originally conceived as an entry point for people arriving on steamers from England and it was the departure point for the last British troops when India obtained its independence in 1947.

Our luxury accommodations on the ferry boat. Actually the ride was quite pleasant.

Views of the Gateway taken from the ferry.

Ferries waiting for their turn. In the background may be seen the Indian Yacht Club.

A nice water front view of the famous Taj Mahal Palace Hotel. This is one of the locations of the 2008 terrorist attack which killed at least 167 people, 31 at the Hotel. 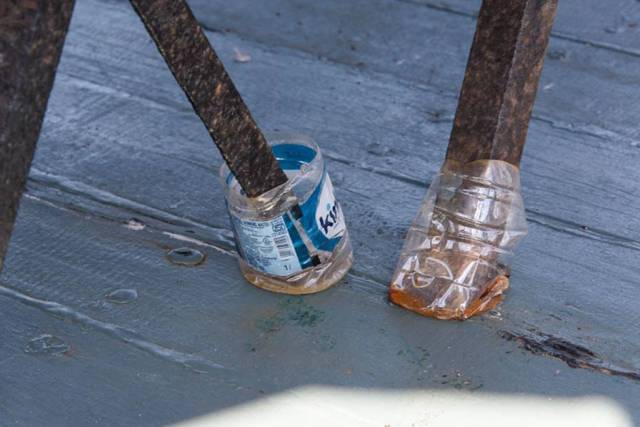 Nothing is spared on the ferries to make for a comfortable and safe trip! 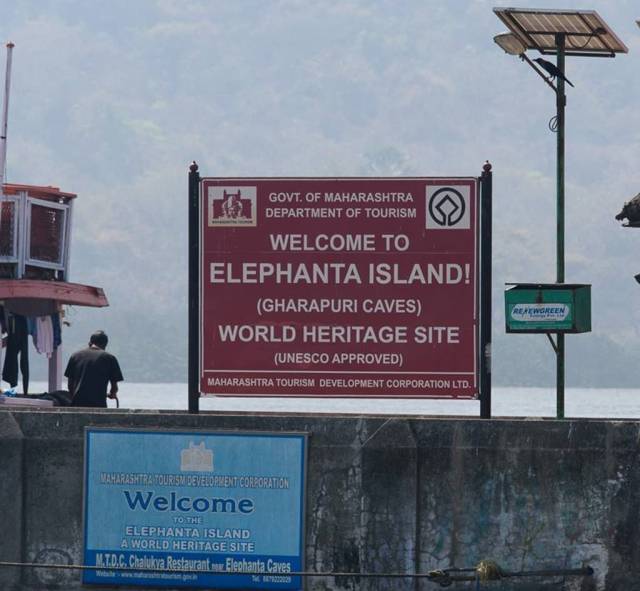 Similar to European riverboat dockings, It was necessary to cross several vessels to disembark.

The narrow gage train which carried us the approximately three-quarters of a mile to the island. 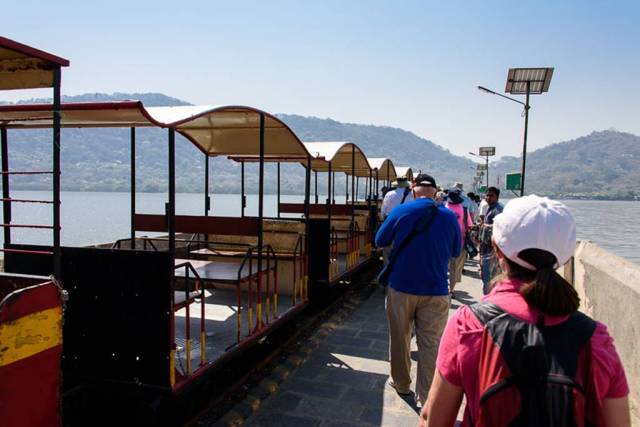 Monkeys, monkeys everywhere. We were warned to be careful, they would steal from you…

Over a thousand years ago, Hindu craftsmen carved columns and sculptures out of a series of caves located on the island. They created a temple complex dedicated to Lord Shiva. 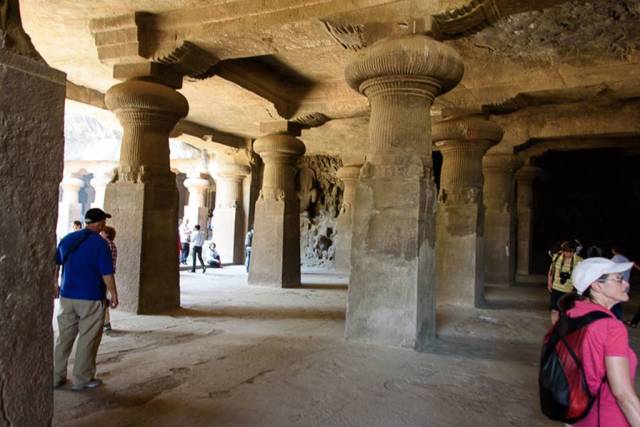 There are a total of seven caves on the island. By far the most important and impressive is called the Main. It is located on the western hill of the island at an elevation of about 250 feet above sea level. The body of the cave is supported by six rows of columns, six in each row. The columns differ not only in size and shape but even in their details. The columns all possess a fluted capital at the top.

Shiva is depicted in caves in his many different forms. The one above is interesting as it is Ardhanarishwara or Shiva in one form of Shiva and Parvati. If I understand correctly Parvati was Shiva wife. In this carving Shiva depicts both male and female. 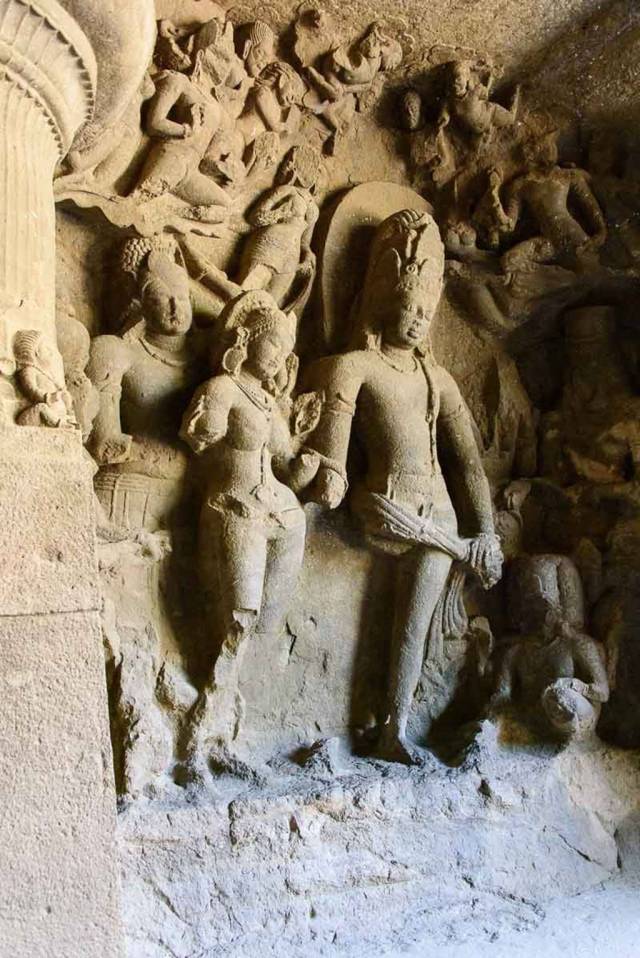 This carving is the Kalayansundar Murti or the Marriage of Shiva and Parvati. 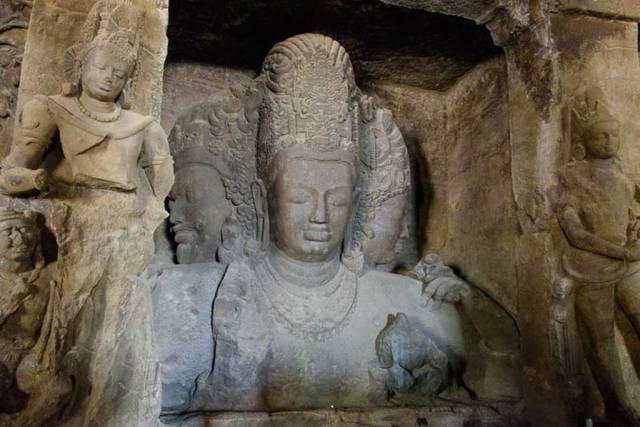 This huge figure carved deep in the cave I the Mahesh Murti which depicts the three faces of Shiva which correspond to the three functions of the god, namely, the creation, the protection and the destruction of the universe. 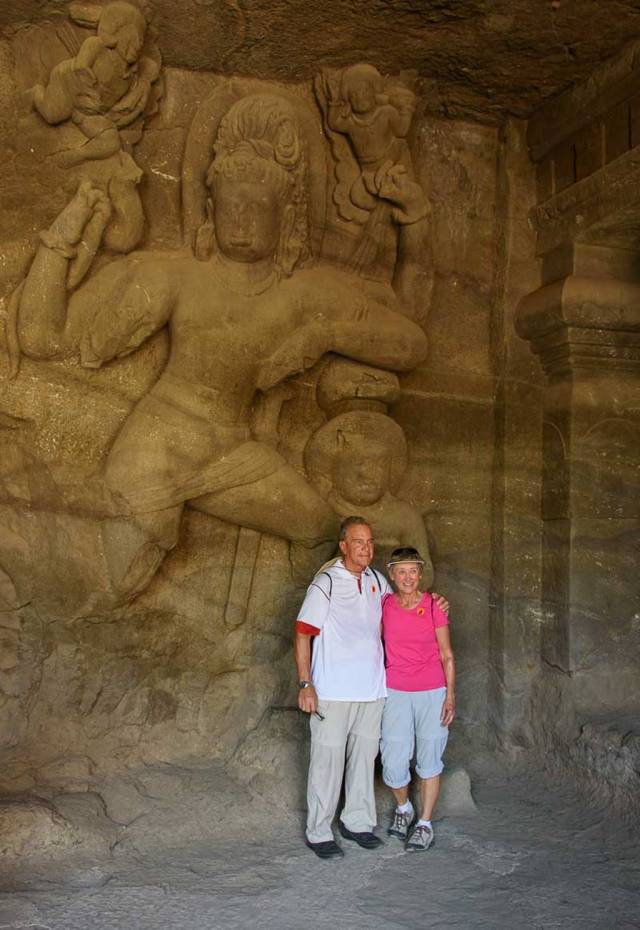 Carl and Janet standing before Dvarpala, the Guardian Figure to the right of Shiva. This give some perspective to the size of these carvings which were done from the basaltic cave itself. 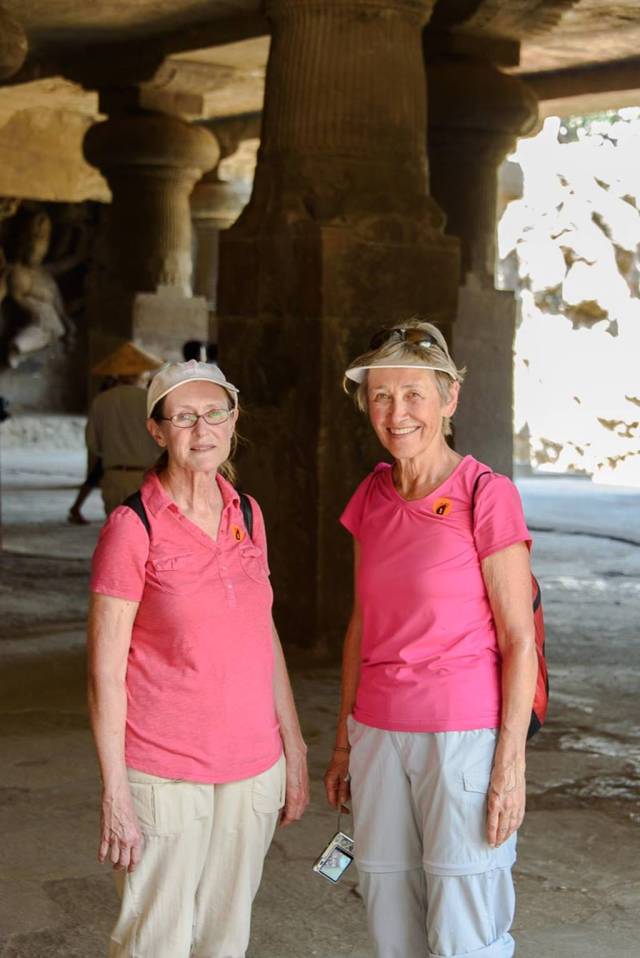 The “bopsy twins”. They really didn’t coordinate their outfits this morning. 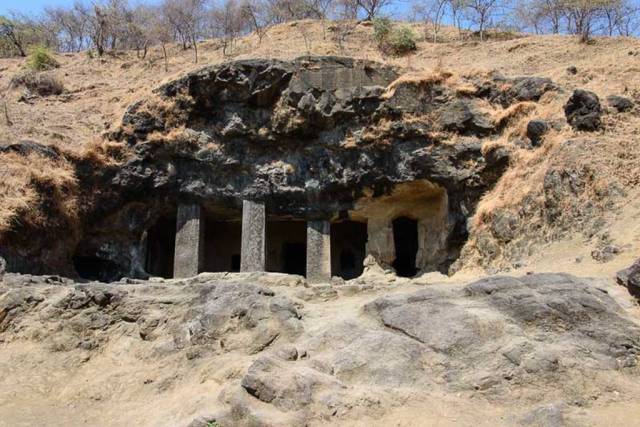 The entrance to, I believe, Cave number two. 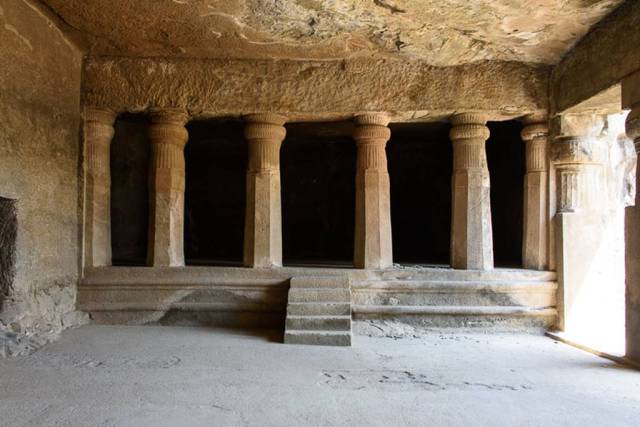 Not all of the caves have been cleaned and developed. This is the 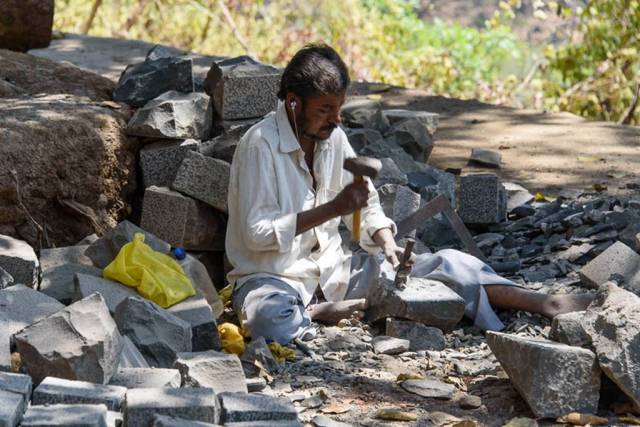 Stone workers were manually forming blocks to be used in the reconstruction and repair of the caves.

This gentleman was making use a Doli, a chair carried by four local villagers to avoid climbing the 120 steps. Although it is only 120 steps there are inclines between the steps which make the climb more difficult than it would appear. The gentleman’s wife said the cost was 1200 rupees or about $20.00. I offered to purchase one for Carl just so I could make a photo. He was afraid he would never be able to live that image down… 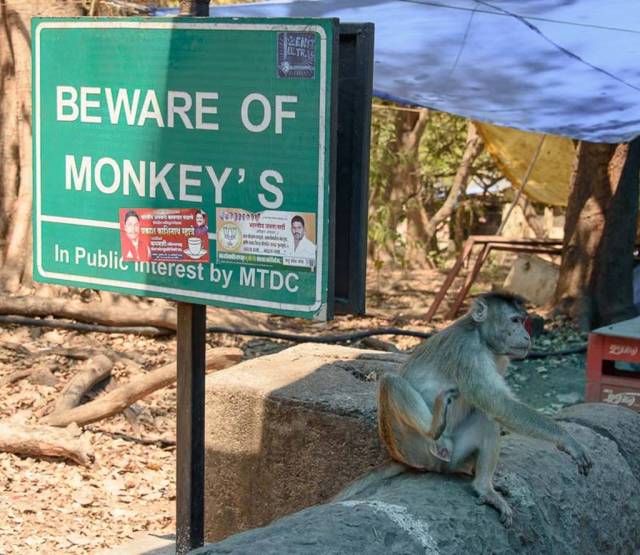 Patiently waiting for a discard. 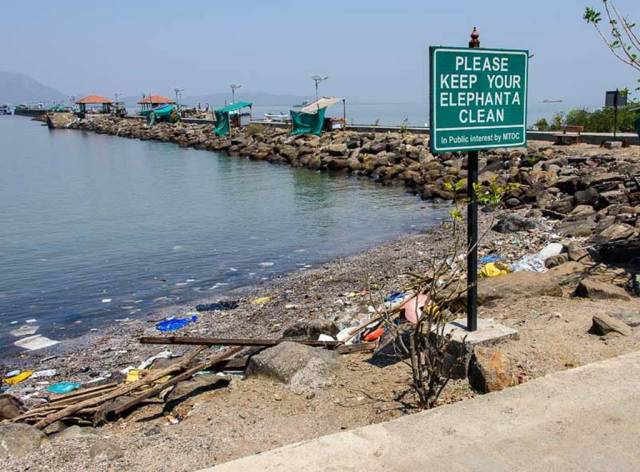 Kay, Janet and I decided to walk back to the ferry rather than take the train. After looking at the track, I think it was a good idea.

We had been warned on the ship, but this sign was posted at the Gateway to India warning to not eat the food from street vendors. Not very encouraging.

We arrived back at the ship in the early afternoon, too late for lunch in the La Fontaine so I was bad and had a burger at the Dive In on the Lido. It was delicious, but pretty much killed my appetite for dinner which was less than 4 hours away.

Following dinner we watched a movie in the Queen’s Lounge “The Theory of Everything” about Stephen Hawking and his wife. This was one I felt could go either way as far as amusement. As it turned out we all enjoyed the movie very much. It made me want to try and find my copy of Hawking’s book “A Brief History of Time” when we return home.

In conclusion, for the day, I enjoyed Elephantine Island and the ferry ride with the relatively fresh air. Otherwise Mumbai is probably the least favorite city I have ever visited. I have never had asthma or other bronchial problems but I suffered today. Not so much with difficulty of breathing but with throat and lung irritation, the air is really bad.

This concludes day 1. I am going to post now, before lunch on Saturday morning and get started on Day 2.