Today is Easter Monday of Passover week in Israel. We were out early again for an 8:00 AM tour which lasted 10 hours. Since we have already gone through face to face with immigrations in Ashdod, the procedure was much easier and quicker in our second port of Israel. Our tour today was quite ambitious, and I am glad to say went much smoother than yesterday’s fiasco.

We departed the pier at Haifa for a one hour drive through the Jazre’el Valley to Nazareth, the childhood home of Jesus and the City of the Annunciation. Nazareth is revered as the spot where the angel Gabriel appeared to Mary, telling her that she would bear the Son of God. 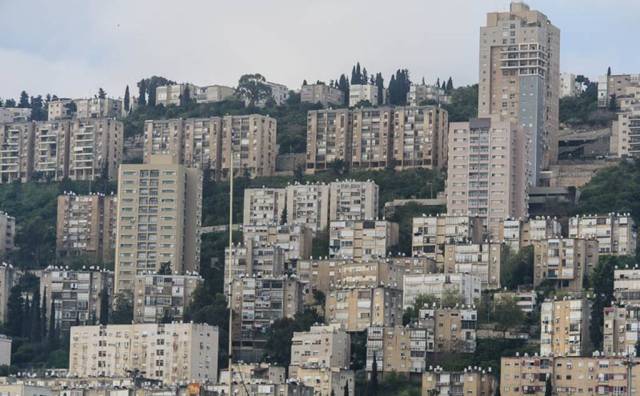 Haifa is a modern Israeli city which is built on the hilly coast. The most prominent of which is Mt. Carmel. Later there is a photo from the top of Mt. Carmel. 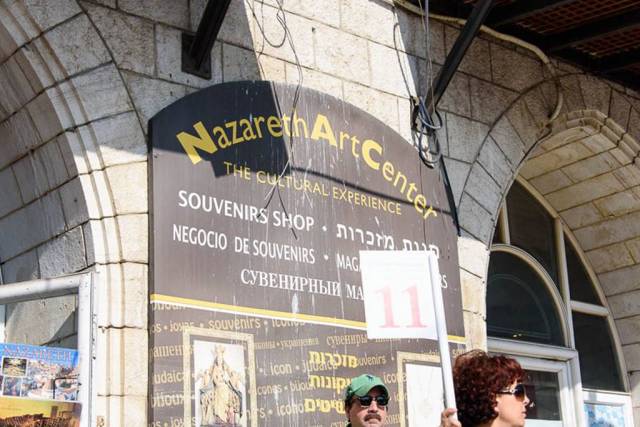 Like every tourist site, religious or not, the city has been commercialized to take advantage of the tourist and pilgrims.

The city of Nazareth is no longer the quite sleepy village it was in Christ day. It is not a teeming city which is predominately Muslim as this sign and many similar attest to. 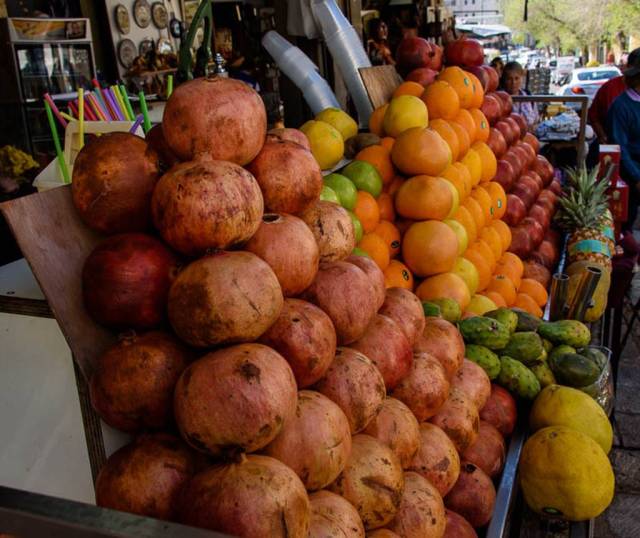 Pomegranates, in the foreground is a major product of this area.

The Church of the Annunciation, built on (over) the site where Mary is said to have lived and where she received Gabriel’s message. 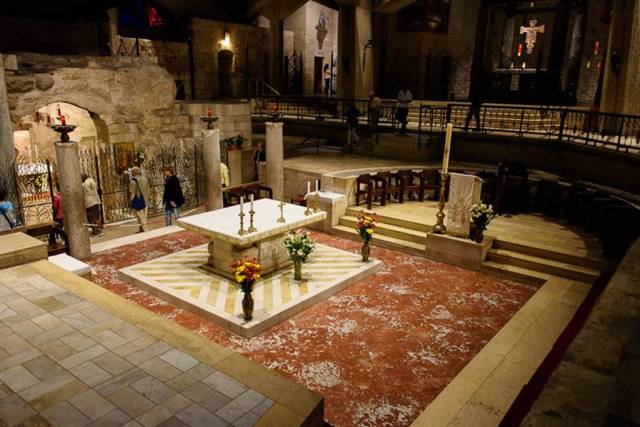 Inside the church with what is thought to be Mary’s house in the enclosure to the left. 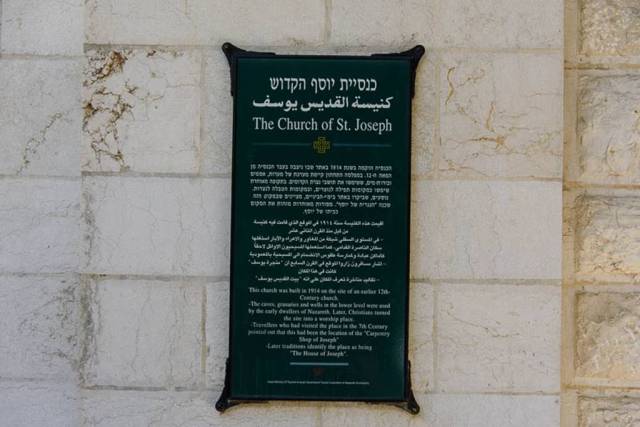 We then visited the Church of St. Joseph. Supposedly the location of the workshop of Joseph. Personally, I have a really difficult time believing that anyone knows the exact location of many of these sacred sites, especially when the place is not “pointed out” until 700 years after the birth of Christ. I have no doubt of that this is in the old part of the old city of Nazareth and it “could be” the exact location, but so could a number of other spots. I know I am a cynic, but it goes back to the “if you build it, people will come”. On the other hand, it really doesn’t take away from the wonderful experience of being around the location that these great saints lived. 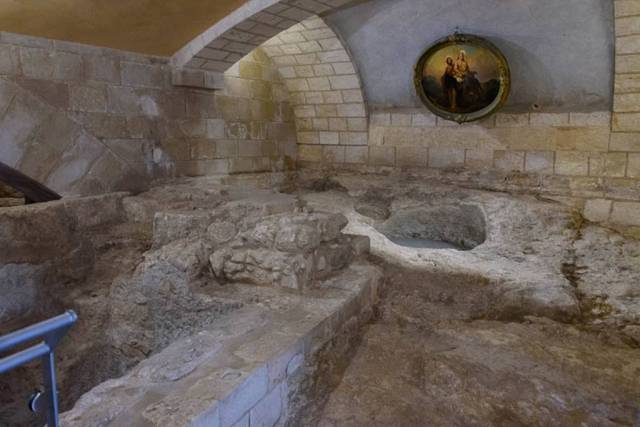 The bath house located under the Church of St. Joseph. 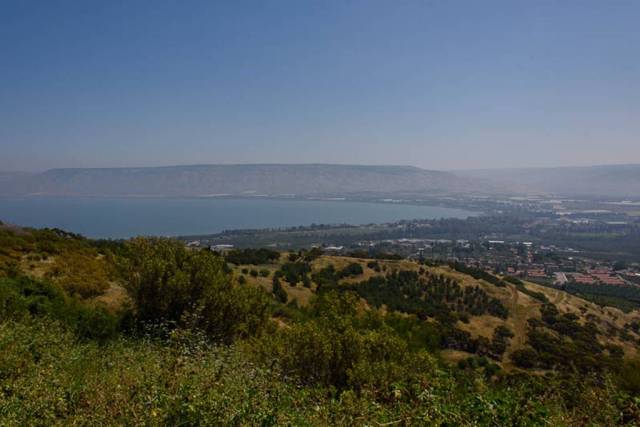 Our first glimpse of the Sea of Galilee. 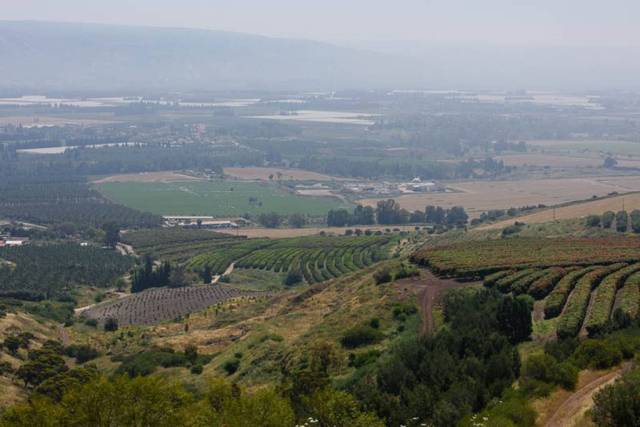 One of the hundreds of fertile orchards around this area. Many are operated by a Kinnerets, the particular Israeli communal farms. 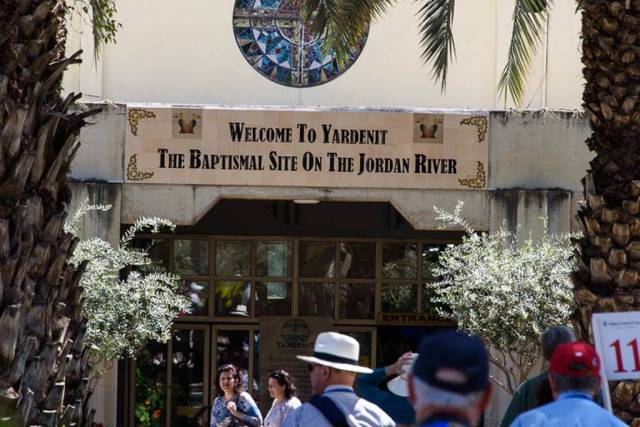 We then visited a baptismal site on the Jordan River operated by a Kinneret. It was a very commercial establishment, but it was a lovely area along the Jordan. 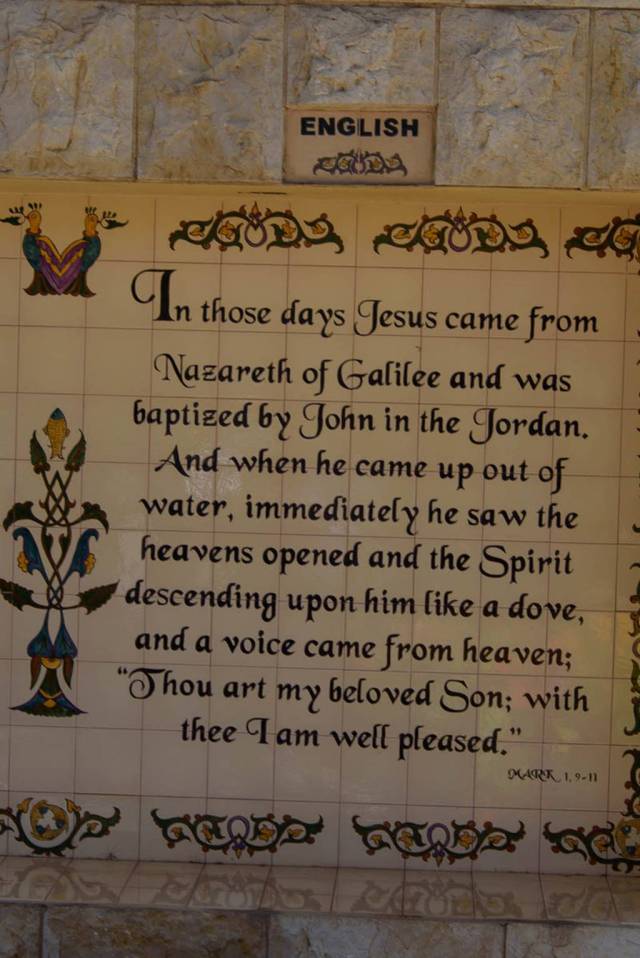 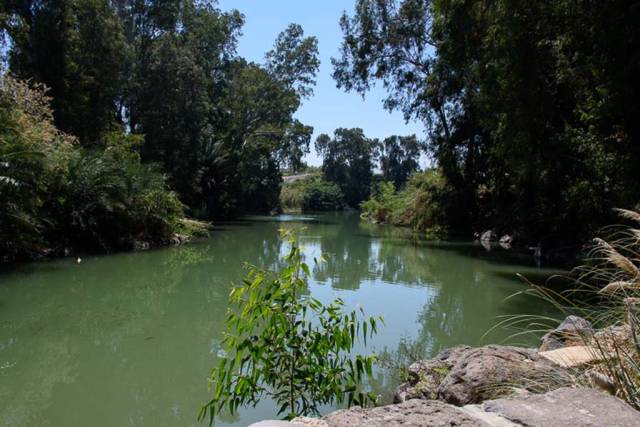 The Jordan’s flow is now controlled by a dam on the Sea of Galilee. As a result it is a small meandering stream. I would almost hesitate to call it a river. 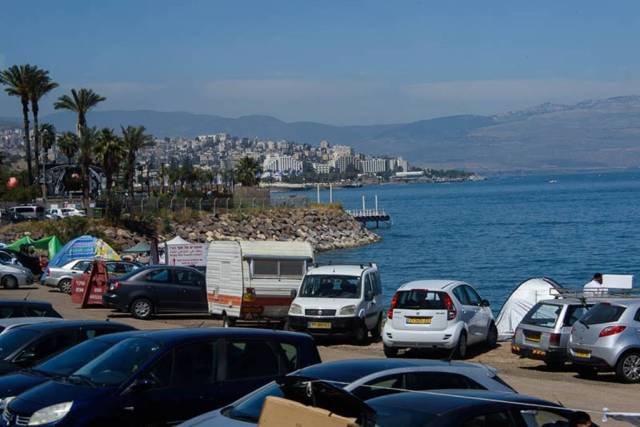 This is of course Easter Monday and a holiday. As a result the coast of the Sea of Galilee was covered by people on holiday. In camping areas almost every square foot of space was covered. 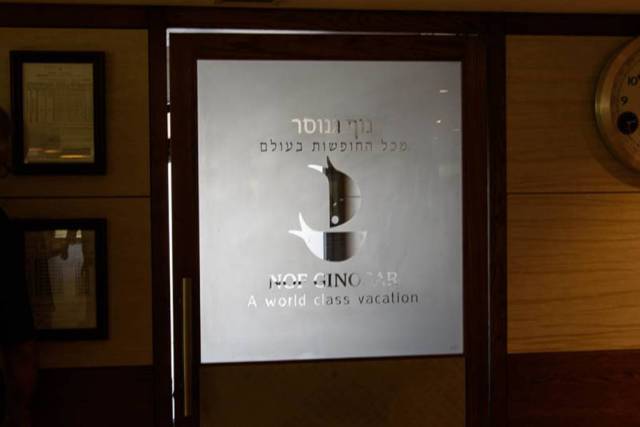 We had lunch at a Kinneret, the Nof Ginosar, a vacation resort. The food was excellent, but as was the case yesterday the wine was terrible (although it was unlimited). 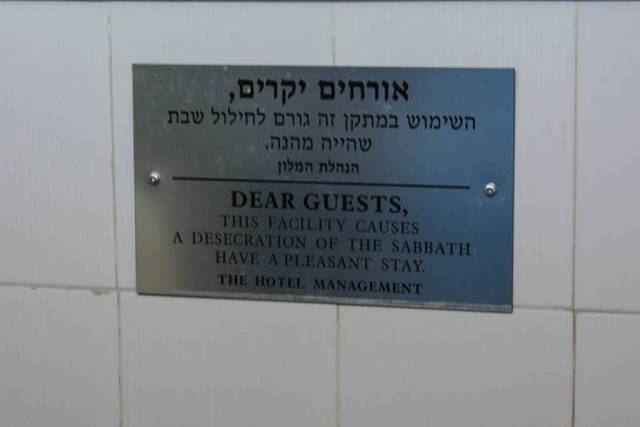 This sign was located over a urinal in the men’s bathroom. I had to ask our guide for an explanation and she couldn’t even interpret the meaning until she read the Hebrew. Basically, it means that if you are a strict observer of the Sabbath, the use of this facility would be improper because the flush mechanism is automatic (detected by a photocell) and would thus violate the Sabbath because it would be using electricity.

After lunch we proceeded along the western side of the Sea of Galilee, passing the village of Cana where Jesus performed his first miracle, turning water into wine at a wedding. From there we trailed on to Tabgha to visit the church of Peter’s Primacy by the lake and Capernaum, St. Peter’s village. 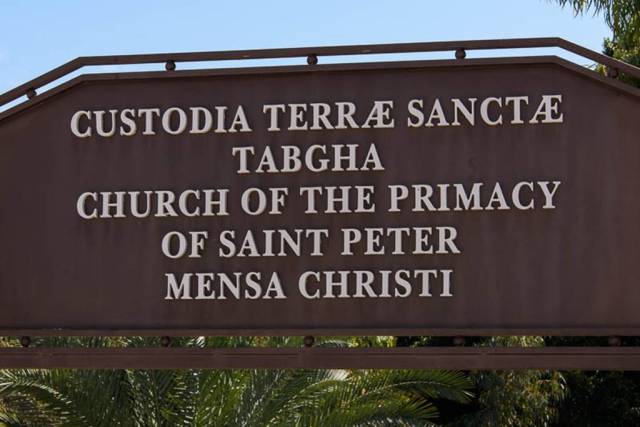 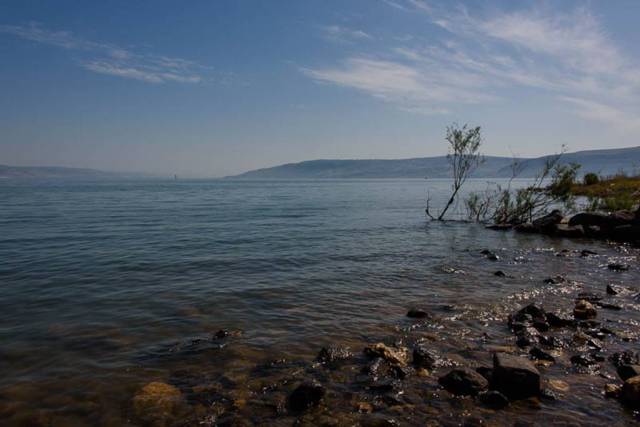 The sea of Galilee as seen from the shore near Capernaum. The Golan Heights may be seen in the background on the other side of the Sea. 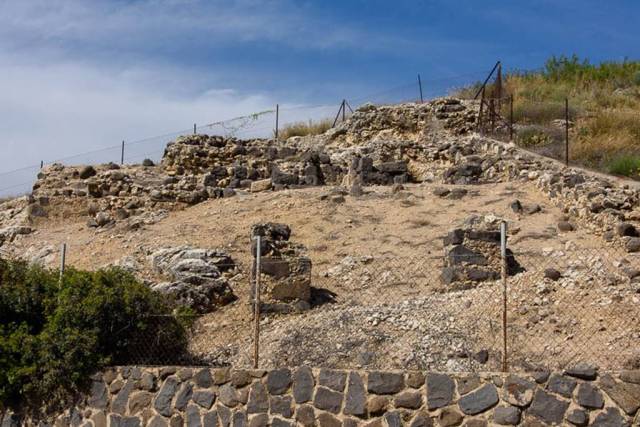 This is the Mount of the Beatitudes, site of the Sermon on the Mount. 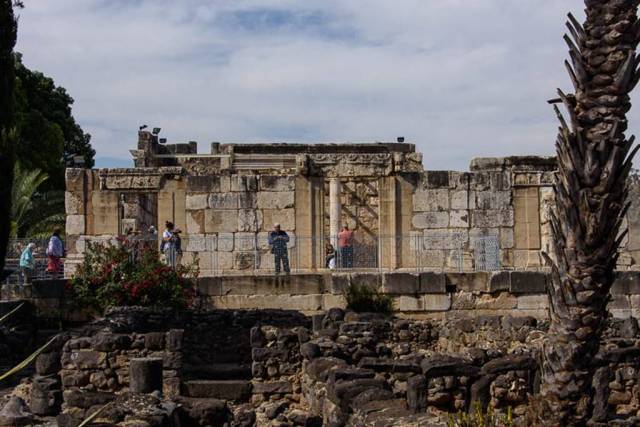 Capernaum is perhaps the most established and historically defined area in the region. Above is the ancient Synagogue where Jesus taught. St. Peters house (actually St. Peters mother-in-law’s house is located only a few hundred feet away, and is now covered by a 20th century constructed church. 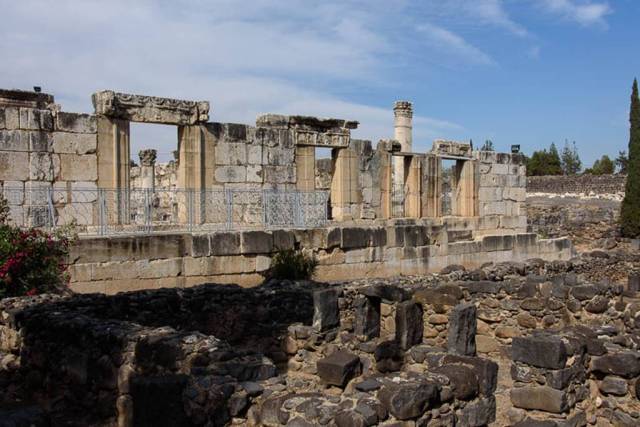 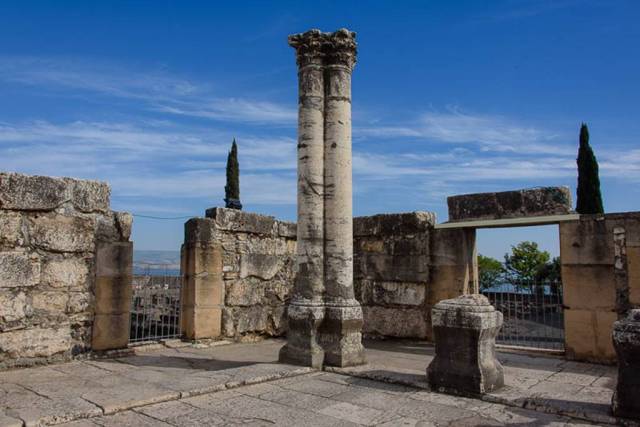 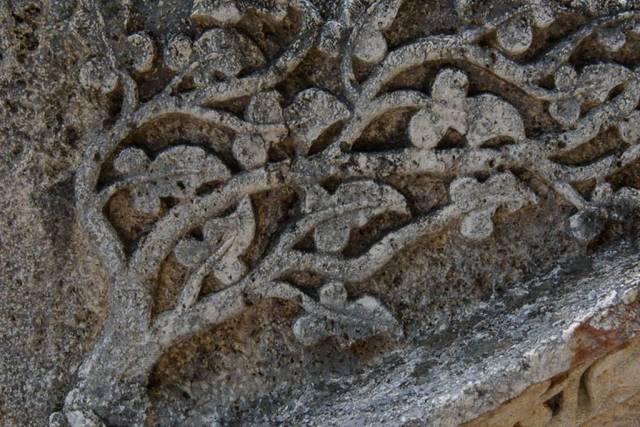 Some of the beautiful stonework. 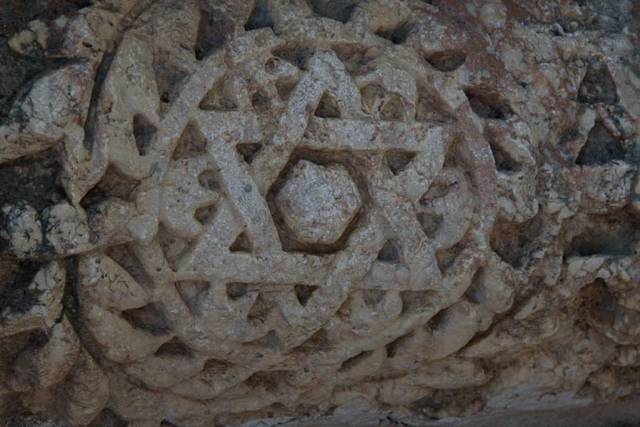 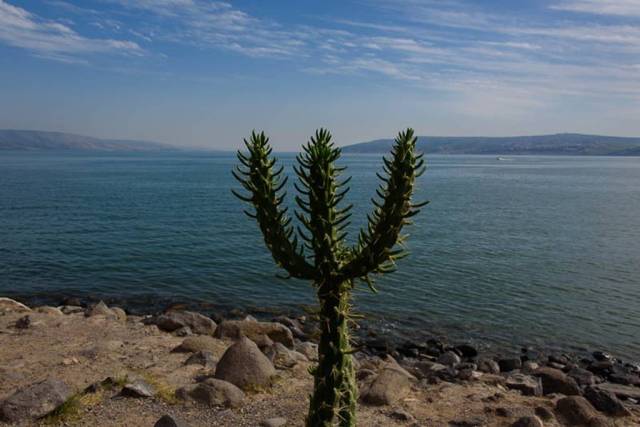 The Sea of Galilee as seen from Capernaum. Only a short distance from the Mount of Beatitudes. 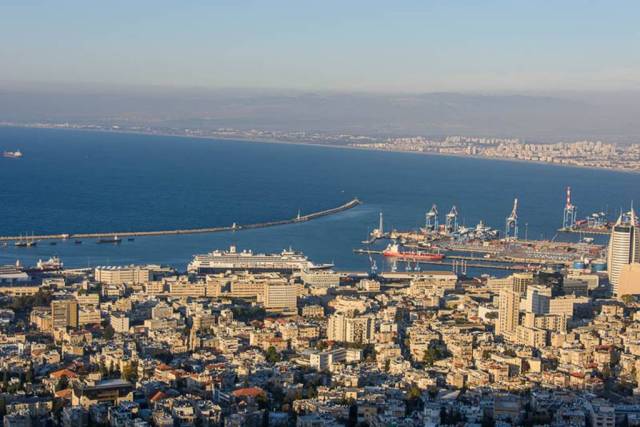 After arriving back in Haifa, we ascended to the top of Mount Carmel which gives a grand view of the city and the harbor.

It was a long day, the tour lasted about 10 ½ hours, but was really enjoyable.

Day 92 is a recovery day at sea. Holland America CEO, Mr. Stein Krouse, and Holland America Line president, Orlando Ashford joined the ship yesterday in Haifa. Tonight we had a Mariner Appreciation Cocktail Party followed by dinner where we received complimentary wine. Tomorrow we have an excursion to Ephesus which will last about 7 hours. We will be returning to the ship around 3:30. We will then be leaving again for Ephesus around 6:00 PM to attend a concert held at the coliseum at Ephesus featuring the Aegean Chamber Orchestra. This is really exciting to be able to actually attend a concert here since only one or two events are allowed here each year.